Belgium has been a long time coming. From ingredient hunting and recipe research to execution – along with a hasty move a few blocks down the road – a month was barely enough time to pull it off.

When people think of Belgian food, most of them immediately imagine the semi-national dish of moules-frites (mussels and fries), along with maybe some fluffy waffles and sour beer. I think mussels are just fine and dandy, but they were a little too obvious for me. I decided to instead search for the mother of all recipes for carbonade à la flamande, a beef, onion and beer stew that really emphasizes the Flemish aspects of Belgian culture.

The research was arduous. I found so, so many versions of this dish, all with tiny variations and unique ingredients. I even had to make a spreadsheet to compare all the miniscule differences. Seriously. A major resource, and one that I recommend to any researcher of food and/or culture, is eGullet, a service provided by the Society for Culinary Arts & Letters, a nonprofit organization dedicated to “advancement of the culinary arts”. The people there are beyond knowledgeable, and with a little discretion and common sense you can find an unreal amount of accurate information on world cuisine.

My recipe is, in truth, an average of the many recipes I found. The only thing I omitted (and with some trepidation) was extrait de chicorée, or chicory root extract. This powder, harvested from the root of the Belgian endive, is often employed by beer-makers to give a bitter flavor to their dark beers and stouts, and can even act as a stand-in or additive to coffee. It only appeared in one recipe for carbonade and seemed like more of a flavor-corrector than an essential ingredient, so I left it out.

Here’s the byzantine process of carbonade-making:

First, make pain d’épices. “What the hell is that?” you may ask. Well, it’s a spiced honey bread, something akin to gingerbread, and it is a vestige of the French presence in Belgium. “What the hell is it for??” you may then ask, more aggressively. Well, it’s crucial to our stew, as you’ll see later on. For now, save a few slices for the stew and eat the rest with some butter or jam.

Next you will need to assemble your main ingredients – some beef in rough chunks (a mix of chuck and rump, preferably – whatever is cheapest), some salt pork, a few onions, shallots and garlic cloves, and your seasonings. The salt pork gets rendered and the beef gets browned briefly (alliteration woo!) in a dutch oven (funny, since the Dutch are a big deal in Belgium) and set aside. 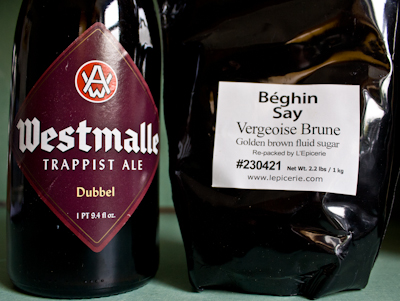 The other two ingredients are the most crucial – they represent exactly what makes this dish a carbonade, rather than just beef stew. The first is a Trappist beer, made in a Belgian (or possibly Dutch) monastery by Trappist monks. Relax, you won’t have to climb to a little house on some remote mountainside to get this – they have it a Whole Foods. I chose a Westmalle Dubbel, which, according to the beer snobs on Wikipedia, is a brown ale “with understated bitterness, fairly heavy body, and a pronounced fruitiness and cereal character.” Yeah. You could use any beer produced in Belgium for this dish, really, and each one would give the stew a different character.

The other ingredient in the discreet black packaging was the toughest to get. It’s called vergeoise brun, and it’s a variety of brown sugar that is unique to northern France and Belgium. It’s made from sugar beets, not cane, and is more free-flowing and soft that the brown sugar we usually get in the U.S. I had a hell of a time finding this – at one point I even had my friend Charlotte scouring Paris’ shops for a small bag of it. (Charlotte is a peach, by the way, and you should listen to her radio broadcasts here, on Radio Vinci!) After much ado, I got a reasonable package of vergeoise brun from L’Epicierie.

Why the sugar? It sort of nudges the onions and shallots to a deeper caramelization, while adding a sweetness that will complement the sourness of the beer and the richness of the various fatty meats. Why not just regular, freedom-loving brown sugar, made in the US of A? Well, clearly my Belgian dish would not taste right without Belgian ingredients – that’s the whole point of this project, you know? Here, take a look at the before/after difference in this onion montage: 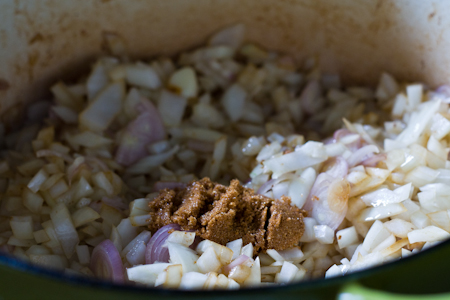 At this point, we’ve prepped everything. It’s time to let the unforgiving heat of the oven do it’s job for a few hours. Deglaze the pan with red wine vinegar, and dump everything into the pot.

Remember that pain d’épices? Hopefully you didn’t eat all of it. Slather four thin slices with good Dijon mustard and float them on the surface of the stew, like so: 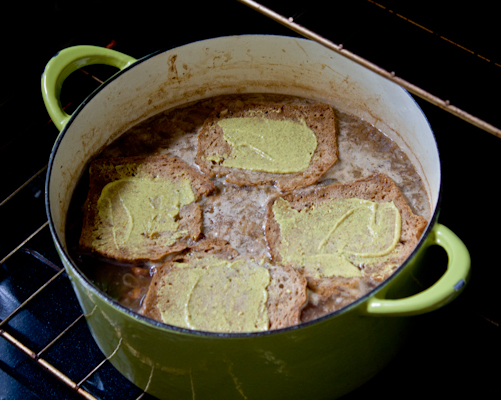 The bread will slowly break down and act as a liaison, or thickening agent.

While that’s cooking you have a few hours to drink the other bottle of beer you hopefully bought, and prep the potatoes (the longest ones you can find) for their magnificent transformation into Belgian frites.

Peel them and slice them into half-inch batons, and immediately throw them into a big bowl of ice water. They can soak anywhere from an hour to overnight. I did about four hours. 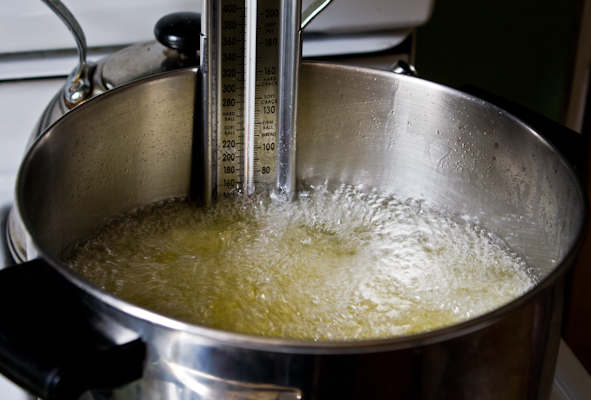 Next, fry them in small batches at medium low (about 280 degrees) for about 8 minutes, until they are semi-opaque. Drain them in a single layer on a paper towel.

After a little rest (and another glass of beer), raise the oil’s temperature to 375 degrees (a fry thermometer is the best ten dollars I’ve spent in a while) and, again, fry the taters in small batches until golden brown. This second fry is the reason that restaurant fries almost always taste better and come out crispier than yours.

Hopefully you’ve timed all this correctly and your stew has reduced down to a thick, dark sauce. The beef pieces will be easily smashed with a wooden spoon.

The flavors in this carbonade are hard to describe accurately, but I’ll try – sweet, sour, beefy; somewhere between French onion soup and stewed plums, but way meatier. The beer also holds its own in every bite. There’s a LOT going on here. It’s a rich, warming dish, ruddy brown and stripped of éclat. With the toasty, carb-y, salty canvas of the frites as a foil, you’ll be huffing down bowls of this in a frenzy. Especially if you drank a whole bottle of that Westmalle Dubbel – dude, it’s like 8% alcohol, slow down.

Fill a large bowl with ice water. Peel the potatoes and cut them into 1/2-inch thick sticks. Put them immediately into the bowl of ice water to keep them from oxidizing. Leave them in the water anywhere from one hour to overnight, then rinse well in cold water to take out a large amount of the starch.

In a heavy-bottomed pot, heat the oil to 280°F and cook the potatoes in small batches, about 6 to 8 minutes for each batch, until they are soft and their color has paled to opaque white. Do not get impatient and yank them out early. Remove them from the oil and spread evenly on the baking sheet. Let them rest at least 15 minutes.

Bring the oil up to 375°F – no hotter, no cooler. Fry the blanched potatoes in batches for 2 to 3 minutes, each, or until they are crispy and golden brown. Remove from the oil and immediately drop the fries into a large bowl which has been lined with a clean, dry paper towel. Add salt to taste. Toss well. Serve hot.

Preheat the oven to 325 degrees.

Render the salt pork in a heavy dutch oven. Drain pieces and reserve.

In the pork fat, lightly brown the beef chunks for a few minutes until medium rare (they should still be a little bloody). Set aside beef chunks.

In the rendered fats, and over medium heat, saute the garlic first, then the onions and shallots. When they have begun to turn brown, add the vergeoise and stir well. Continue to stir occasionally until the contents of the pot have taken on a deep, dark brown color.

Deglaze the pan with the red wine vinegar. Add the stock, the beer, bay leaves and thyme, and the white flour (whisk this into the broth to avoid lumps).

Smear the mustard evenly across four thin slices of pain d’épices and float them on top of the stew.

Let the stew cook uncovered in the oven for about 4 hours, stirring every 20 minutes or so, until it has reduced to a thick brown sauce.

Remove bay leaves and thyme sprig. Serve hot with frites and a glass of the same beer you used in the stew.

4 thoughts on “Kingdom of Belgium”